It is well known that due to limited practical size of a UDP packet that can be transmitted without fragmentation, the number of DNS root servers is limited to 13 addresses. There are indeed 13 root servers named from A to M (a.root-servers.net, b.root-servers.net and so on). However, if you visit root-servers.org, you can see that most of those servers somehow have dozens and even hundreds locations around the world. How is it possible for one server to have more than one location? The answer is anycast routing.

Unlike multicast, which requires that all participants including clients support that special routing mechanism, anycast is indistinguishable from unicast for clients, servers, and most routers. In IPv4, it’s simply a special type of network design and routing protocol configuration that is indistinguishable from unicast for any host involved in it. In this article we assume the protocol is IPv4. 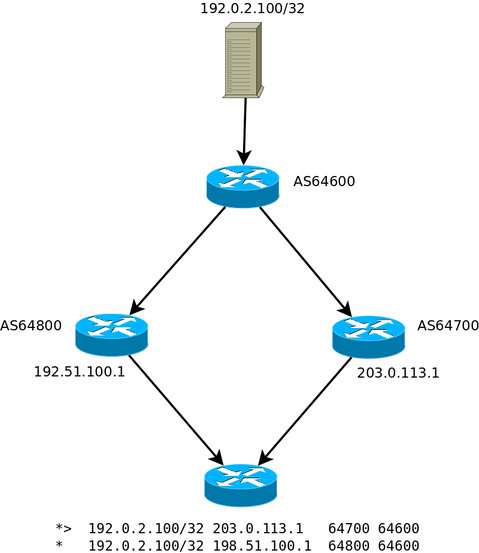 Now the key idea is that an autonomous system is simply “a group of networks under single administration”. There’s nothing in BGP or any other protocol that places any limitations on the internal topology of an AS and connectivity between its parts. In fact, there may not be direct connection between its parts at all.

To ensure that the service provided by the 192.0.2.100 server will remain available even if that site fails, we can setup another server and another router at a different site and configure them in exactly the same way. 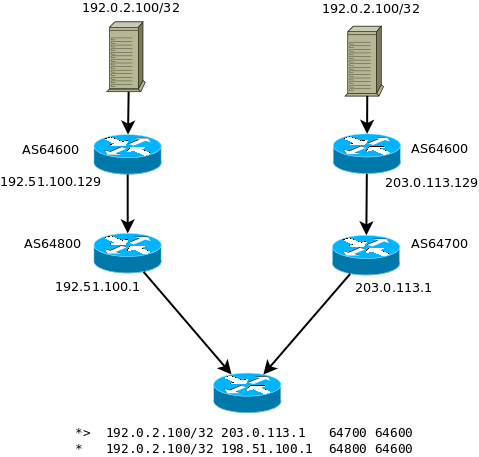 The BGP table of the client router will not change at all, it will remain completely unaware of any change at all, much less of the unusual configuration. The routers of AS64700 and AS64800 will now have two different paths to 192.0.2.100, one directly connected and nother one through each other (assuming they are peering with each other), but by looking at show ip bgp output there’s still no way to find out if it’s anycast or the sites of AS64600 have a direct connection between each other that is invisible to us. At the network layer, it all looks like anycast.

Apart from redundancy, anycast provides transparent load balancing. Since BGP routers will use the shortest path, they will automatically choose the site closest to them, in terms of AS path anyway.

However, lack of any distinction from unicast at the network level is a double edged sword. While it means no special configuration of clients of servers is required to get the routing and load balancing to work, it also means there is no way to control which site receives client traffic, or even a guarantee that all requests from the same client will be received by the same site. For this reason anycast is best suited for stateless services such as DNS, or web servers with static content (CDNs), and it still needs a way to keep those servers synchronized. Despite its limitations, it’s still a very valuable tool though, definitely good enough to maintain high availability of critical components of the Internet infrastructure such as DNS root servers.